The prospect of tasting 15 prestige cuvée champagnes in one sitting later this week is a mouth-watering one.  Especially as they are all from the celebrated 2002 vintage, which will probably, with a little competition from 2008 & ’09, go down as the finest vintage of the past decade. But it’s interesting to speculate — before I have seen the actual list — who will be included in the line-up?

I imagine Dom Pérignon, Cristal and Krug will be there, the last named only released to a rapturous welcome early this year, while Cristal will potentially boast considerable bottle age, given it was first made available over seven years ago. I guess Dom Ruinart, fabulously rich and powerful in 2002 and Clicquot’s La Grande Dame will complete the Moët-Hennessy quartet in the line-up.

Pol Roger Sir Winston Churchill and Salon are two further acclaimed ‘02 releases, and I’m pretty sure Taittinger’s Comte de Champagne will feature (see my piece on the recent Finest Bubble vertical tasting of Comte 1996-2006 which included the 2002). To these eight we can probably add END_OF_DOCUMENT_TOKEN_TO_BE_REPLACED

I used to be unenthusiastic about rosé champagne. I have an issue with the fact that it is generally priced at a similar level to vintage champagne, but rarely offers anything like the same emjoyable drinking experience. However I have to admit there are now many more 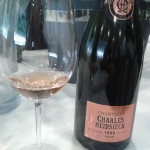 attractive pink champagnes on the market and for Valentine’s Day lots of people will be drawn into buying pink fizz. So what are the best options, outside the supermarket norm but not in the stratospheric price territory (over £200) occupied by the big brands’ rosés, the likes of Cristal, Dom Pérignon, Krug, Comtes de Champagne, Clicquot’s La Grande Dame and Laurent-Perrier’s Cuvée Alexandra?

I am particularly attracted to the more winey, Burgundy style Pinot Noir driven pinks that age really well and work surprisingly well with food, particularly game. In this camp I’d include Veuve Clicquot Cave Privée Rosé, ideally the 1989 vintage which is still available, if in fairly limited distribution. Ten years younger, but both delicious in their different ways are Charles Heidsieck’s 1999 Rosé and Bollinger La Grande Année 1999 Rosé, Closer in style to the Clicquot with powerful rich Pinot Noir from Les Riceys playing a significant role in the blend comes Nicolas Feuillatte’s Palmes d’Or Rosé. I have the 1999, 2004 and 2005 vintages and will probably open the ‘99 myself on the 14th.

More delicate in style, but slightly more expensive is the creamy textured Billecart-Salmon’s Cuvée Elisabeth Salmon 2002. Great value but certainly not inferior comes the delicately fruity, but distinctly classy Joseph Perrier 2004 Rosé. Bruno Paillard Premier Cru Rosé is another winner resonating breeding and, as the best pinks are, very moreish. And Gosset Grande Rosé, which I tried again only this afternoon, is a very desirable, seductive pink that rapidly disappears.

That only leaves two remaining slots to fill and for these I am going to go to the Côte des Bar region to the south-east of Troyes where Michel Drappier makes a charming Burgundy-like pink and bio-dynamic producer Fleury produces something substantial and savoury, that would easily and enjoyably be consumed with an Asian duck dish. Finally I am going to cheat and add an 11th pink that is widely distributed in the supermarkets, that from Veuve Clicquot. This is probably the pink fizz I have tried most often in the past 18 months and has been consistently among the most enjoyable.