Following the warmest April on record and with the maximum permitted yield in the appellation set at the new INAO agreed high of 15,500 kilos per hectare, Champagne looked set to have the earliest and largest harvest on record this year. But this expectation has been confounded by unexpectedly wet and cool weather pretty well from May right up until the last week of August.

The warm weather in April, when the average temperature was 5.6degC above the monthly norm of 9.4degC with temperatures above 25degC achieved on 11 days, kick started the growing season and flowering began three weeks in advance of the norm leading to the prediction that the harvest might begin even earlier than in 2003, when grapes were first cut in the Côte des Bar village of Bligny on August 18th.

However with considerably more rain than normal and fewer sunshine hours in both July and August — there were 15 days of rain in the first three weeks of August with more than 6mm falling on seven of them and 60 fewer hours of sunshine than the monthly norm – slowed things down. The first official date for picking was August 23 with a number of villages in the Côte des Bar, including Buxeuil and Neuville-sur-Seine, allowed to start picking black grapes (Pinot Noir and Pinot Meunier) along with Bethon and Cumières (Pinot Meunier only), the latter always one of the first top-rated premiers crus to start the harvest thanks to its exposure.

Having spoken to more than a dozen growers and houses spread across the appellation in the first two weeks of September it appears there was a danger that some people started picking too early to get decent levels of ripeness. Pierre Larmandier of Larmandier Bernier based in Vertus in the Côte des Blancs says:

“There are big problems of maturity where the volume of grapes has not been not controlled and one more time people, especially in Chardonnay, harvest too soon. We began the harvest on September 3 – while other growers in the village started on August 27. For Chardonnay we have no rot, the fruit is very nice, Pinot Noir is a little bit more difficult.”

“This year it is very important to measure the level of sugar in each plot before to picking to be sure to have no problem. In some villages where they decided to begin on August 23, they stopped after three days because of irregular maturity, depending on exposure, grape variety and yield per hectare.”

“For those who were listening to so-called ‘experts’ without even walking in their vineyards, they had to reverse steam in emergency — it reminds me of the Titanic, full speed ahead with no cares of iceberg,” says Philippe le Brun (of Roger le Brun) in Ay. “They had to stop picking, close the press house and to say pickers to come back later, which is hard to manage.” 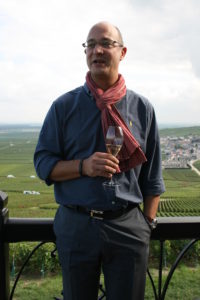 he wished they had waited a little longer before picking began (August 28 and 29 in G. H. Mumm vineyards) “as conditions are now perfect (on September 5), windy and sunny with cool nights, and the grapes that are coming in are better and better in quality.”

Jean-Hervé Chiquet at Jacquesson summed up the dilemma many producers faced:

“When we closed for holidays at the end of July, we thought we could harvest around August 21, but we got the rainiest August in 30 years, with above 100 mms of rain and quite cool temperatures. So when we came back, we were facing the worst choice possible: do we pick when it’s unripe but without too much botrytis, or do we wait for more ripeness but risk more botrytis?”

“As the fruits were decidedly not ripe, we took a compromise decision. Starting on the 29th, picking some quite forward Pinot Meunier and begin the real thing on September 3. It worked because the weather became absolutely ideal: dry, windy, but not too hot. Selection is crucial but this wonderful weather [first two weeks of September] has really saved our lives and the grey rot is much less of a problem than last year, even if the average sugar level is lower.”

In the Côte des Bar, Michel Drappier also delayed the start of picking: “to get more ripe fruits we decided to wait until August 27 and we will finish by the end of this week (September 15) and be among the last to pick. But while it is more important than usual to be selective in the vineyards, the quality is there, botrytis has dried, sugar levels are up (about 10.5%) and acidity is just right,” says Drappier. 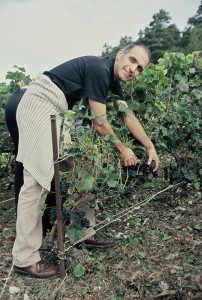 The quality being brought in is considerably better than looked possible as recently as the third week of August. “It seems that many people — sommeliers and journalists in France particularly — have already given a very bad reputation to 2007, but they weren’t here,” says Frédéric Panaïotis, Chef de Caves at Champagne Ruinart. “With a few more days of bad weather it would have been a complete disaster, but as in quite a few years in the past, luck was with the Champenois. It’s certainly been a very strange harvest again, although it’s finished before mid-September, we all felt like we were in late September or early October.”

Jean-Baptiste Lécaillon, chef de Caves at Louis Roederer, concurs: “So early, yet the quality of the grapes are closer to a classic October harvest. Two weeks ago, I would have said that it was more a non-vintage year. Today, I think the quality is, in some places very good and could give some ‘grand vin’ [vintage cuvées]. We have to wait for the winter tastings, but the overall quality should be good,” says Lécaillon. 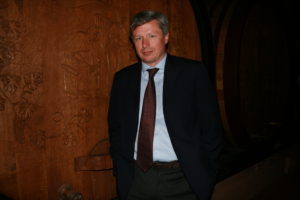 restricts yields. He expects their average yield to be “around 13,000kg/ha, no more”. As Fabien Henry at Chanoine points out: “The quality in the vineyard is not heterogeneous, a lot of difference could occur from a grower to another and from a village from another.” But he also believes: “This year will certainly produce some vintage Blanc de Blancs because Chardonnay is superb everywhere.” 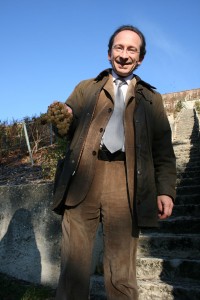 While their yields are also generally low — “ we’ll consider ourselves lucky if we pass the 12,400kg/ha mark” — Charles Philipponnat, Président Directeur Général at Champagne Philipponnat thinks the appellation in general is: “more likely to achieve around 14,000kg/ha.” Mariotti at Mumm agrees with this as an average figure. In general alcohol levels will be relatively low this year, certainly compared to 2006.

Although he made some saignée rosé at 10.8° alc, Philippe Le Brun gives the average on his presses in Ay as 9.6° and acidity around 8g/l and others report similar level of potential alcohol and acidity.

At G. H. Mumm, “Acidity levels are high, but average alcohol levels are lower than usual, around 9.5% compared with 10.3% for G.H. Mumm vineyards last year,” says Mariotti. As Panaïotis at Ruinart notes: “Most tanks, if not all, have been chaptalized to bring alcohol level to around 10.5-10.8% alcohol, quite a change from the previous five years that required almost no chaptalisation.”

Charles Philipponnat agrees chaptalisation will be widespread: “In Champagne, base wines with 10.8deg alc, give a finished product above 12°,” he explains. “Only our own grapes in Clos des Goisses [its steep, due south facing, single vineyard in Mareuil] and parts of Mareuil reached that exceptional point.”

The maximum level of production of 15,500kg/ha (see boxed setting) is only likely to be widely achieved in Chardonnay, which represents slightly less than a third of the total active Champagne vineyard (28.2% or 9,374 hectares out of 31,918 in 2005). In the premier cru of Vertus, where more Chardonnay than Pinot Noir is planted, Larmandier predicts the maximum yield will be widely achieved. “We expect between 11 and 13,000kg/ha for us. In Champagne in general it will not, 15,500kg/ha is a maximum, not a minimum.”

At the harvest meeting between growers and the negociants that took place on July 23 it was decided to allow producers all over the Champagne appellation to pick up to the new maximum allowed yield of 15,500 kilos per hectare*. If this average is reached across the Champagne AOC’s estimated 32,500 hectares of productive vineyard, theoretically 420 million bottles of Champagne could be produced, which is 50m above the previous high achieved in 2004.

This level of yield (15,500kg/ha) is permitted under the new agreement with the Institut Nationale d’Appellations d’Origine (INAO), which runs for an experimental period of five harvests (2007-2011). In reality even if this high level is reached, which towards the end of picking in mid-September looks increasingly unlikely, initially only some 340m bottles will be produced. This is because the base yield is set at 12,400kg/ha (which equates to 340m bottles). However vineyard owners, and this is principally the 15,000 or so individual growers who farm just over 90% of Champagne’s total vineyard (the houses own slightly less than 10%) have the option of producing up to a further 3,100kg/ha depending on the level of wine they already have in their reserve individuelle.

The idea is that between 2007 and 2011, the growers will be encouraged to build up the volume of wine they hold in this reserve individuelle up to maximum of 8,000kg/ha, so providing they currently have 4,700kg/ha or less, they will be able to pick up to the maximum of 15,500kg/ha this year. Prior to the 2007 harvest the Comité Interprofessionnel du Vin de Champagne (CIVC) has confirmed that the average reserve individuelle is 2,680kg/ha so clearly if sufficient grapes are available on the vines this would not stop the extra 3,100kg/ha being picked, although some of the growers may already have reserves closer to the maximum of 8,000 kg/ha which is equivalent to roughly half a harvest.

The Champenois in general want to build reserves up to this level for two main reasons. Firstly, so that if there is a major problem with any particular harvest whether through disease or atrocious weather conditions, they have sufficient wine to produce over 300m bottles even with a yield as low as 4,000kg/ha. You have to go back to 1981 to find a harvest that produced less than 1m hectolitres (it was 692,440 litres or 923,253 bottles), even in the drought reduced 2003 harvest 1,643,000 litres of Champagne was produced (equivalent to about 220m bottles).

This reserve may also be used to increase production over and above the present level if demand keeps on increasing at a rate which can’t be satisfied by the area of vineyard now in production and until further vineyard is planted outside the current defined AOC, which looks increasingly likely to happen but is still a decade or more off. The negociants also hope that once the growers have this 8,000kg/ha in their reserves and know there is little danger of their income suddenly plunging as a result of such a natural disaster, they will take a more conservative and responsible view about grape prices which have risen at an alarming rate in recent years (above 5Euros per kilo for Grands Crus) from the négoce point of view.

*The previously highest permitted yield in Champagne was in 1983 when a maximum of 15,200kg/ha was allowed and when the actual average yield reached 15,006kg/ha across the appellation. However at that time there were only 23,903 hectares of vineyard in production so slightly less than 300m bottles of Champagne was actually produced. In more recent years the highest ever production was recorded in 2004 when the equivalent of just over 375m bottles was harvested.