It may not be true of all wine, but in the case of champagne, the size of the bottle has a perceptible effect on the taste. While the vast majority of champagne is sold in 75cl bottles, if you put the same wine in a magnum it matures more slowly, just as it develops rather faster in a half bottle (37.5cl). While champagne is also sold in larger sizes from Jeroboam (3 litres) up to Melchizedek (30 litres) the wine in these formats is usually made in smaller bottles and decanted into them in a process known as transvasage, losing freshness and fizz in the process*. 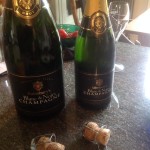 Experience suggests the magnum is also the ideal size for producing champagne with the wines in this format invariably having the edge over their identical counterparts in bottle, though ideally they should be aged longer. In a recent taste test we tried Sainsbury’s Blanc de Noirs in bottle and magnum side by side to see if we could see much discernible difference and the wine in magnum was generally preferred. It was not noticeably fresher (as is often the case) it simply had more depth of flavour and a richer more satisfying mid palate, suggesting it may have been aged longer. A hint more colour and a cork which appeared to indicate it was disgorged some time earlier than the comparable bottle backed up that idea.

Although annoyingly the magnum is no longer on a 25% off promotion (and the bottle size is, see latest offers) as it was when recommended here earlier in the month, at around £40 it still represents good value and if you are entertaining guests this evening you also have the added theatre a  magnum brings to any occasion.
*There are some exceptions to this like Michel Drappier who disgorges in every bottle size from halves up to the Melchizedek and makes excellent wines.