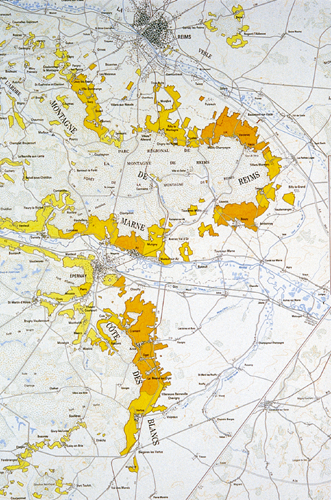 The Champagne appellation extends 150km north to south and nearly 120kms east to west. The most northerly vineyards fan out some 20 kilometres to the north and north-west of the city of Reims in what is known as the Massif de Saint-Thierry between the rivers Aisne and Vesle. The western extreme extends some 15km along the Vallée de la Marne beyond Château Thierry, a short hop down the A4 autoroute to Paris.

While most of the vineyards cease to the west of Châlons-en-Champagne on the eastern flank, there are a few far-flung communes to be found grouped to the north of Vitry-le- Francois. The southernmost vines are planted some 30km to the south east of the ancient and delightful city of Troyes. They are centred on the towns of Bar-sur-Aube and Bar-sur-Seine, respectively hugging the valleys of the rivers Aube and Seine.

This is not one continuous stretch of vineyards, but rather various distinct groupings. The southerly villages of the Côte des Bar are over 100km from Epernay, the town which sits at the heart of the three largest and most prestigious production zones: the Montagne de Reims, the Vallée de la Marne and the Côte des Blancs. At the southerly extreme the vines around Les Riceys in the Côte des Bar are physically considerably closer to the town of Chablis, some 45 kilometres to the west. 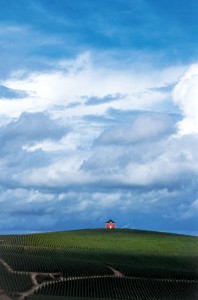 Within this quite large geographic area, the villages included in the Champagne appellation, all 318 of them, are quality rated under a system known as the Échelle des Crus, literally ‘ladder of growths’, and given a classification between 100 and 80% (the lowest rating). Some 257 of these are assessed somewhere between 80 and 89%. One rung higher come the 44 premiers crus, which range in their classification from 90% to 99%. Top of the pile are Champagne’s 17 grands crus villages, all rated 100% on the Échelle des Crus. The 17 highest rated villages are all located in the three best-known districts (see below) with nine in the Montagne de Reims, six in the Côte des Blancs and two — Aÿ and Tours-sur-Marne — in the Vallée de la Marne.

There are then, moving from north to south, five distinctive main production areas in Champagne: Montagne de Reims; Vallée de la Marne; Côte des Blancs; Côte de Sézanne and the Côte des Bar. Although all five are strongly associated with one particular grape, because the soils and aspect are not identical across each district, pockets of all three main varieties — Pinot Noir, Pinot Meunier and Chardonnay — are commonly to be found in each. The likelihood of finding some plantings of all three varieties in any given cru is increased because individual grower producers who may have all their vineyard holdings in just one village usually want the option of cross blending (see The art of Blending below).

This region is best known for black grapes, the reputation of the grand cru villages of Mailly, Verzenay, Verzy, Ambonnay and Bouzy is based on the Pinot Noir grown on the slopes that surround them. Unusually for top-rated sites in the Northern hemisphere, vineyards in the first three villages named largely face to the north. 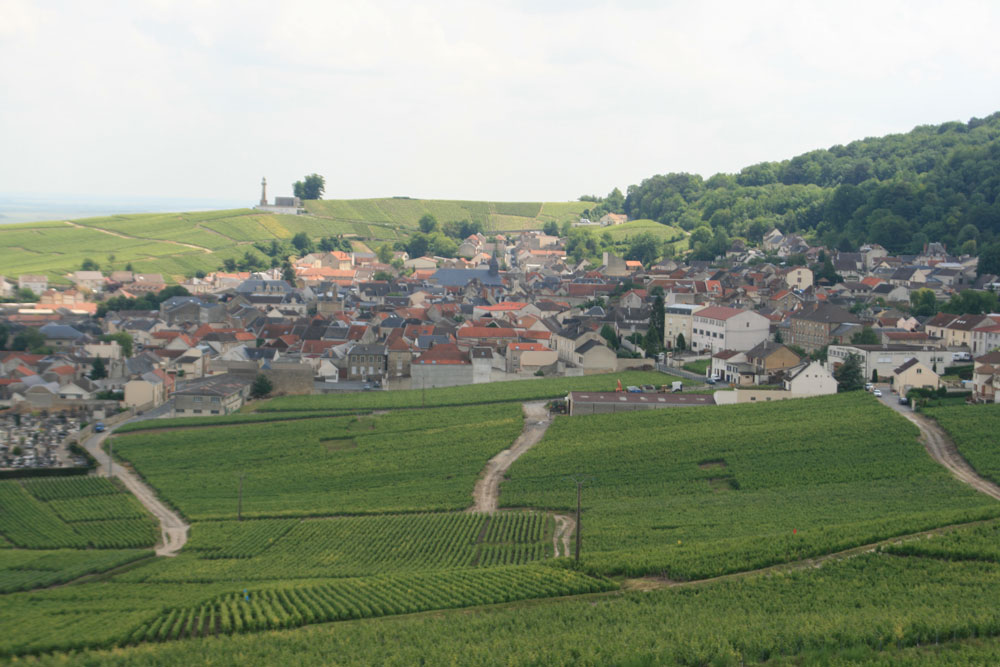 The Montagne – really more of a wide plateau than mountain, it’s only 283 metres is its highest point – describes a U-shaped arc open to the west and running from just south of Reims almost round to the eastern flank of Epernay with sheltered vineyards (less prone to frost) sloping down towards the valleys of the rivers Vesle in the north and Marne in the south. 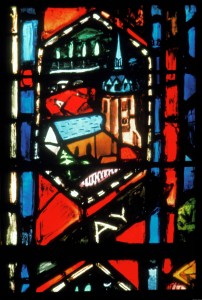 It boasts more grands crus than any other district in Champagne with the less well-known villages of Puisieulx, Sillery, Beamont-sur-Vesle, and Louvois also within its boundaries making nine out the appellation’s 17. Stylistically some houses, would also add the grand cru village of Aÿ, even though like the grand cru of Tours-sur-Marne further to the east it is actually located right next to the river Marne.

Although Pinot Noir is the most widely planted variety in the region (38%), to the west of the village of Ludes and in the Petite Montagne south west of Reims, Pinot Meunier becomes more evident. There are also important pockets of Chardonnay that accounts for 28 per cent of the vineyard area, mostly to be found in the eastern facing villages (at the base of the U) with the highly rated (95% on the Échelle des Crus) premier cru villages of Villers Marmery and Trépail the most significant with 240 and 252 hectares respectively (98% and 91% of the vines in each village).

As should already be clear this is not one homogeneous vineyard producing grapes with near identical characteristics but rather one where the differing microclimate, aspect and exposure of individual sites results in a large range of styles. Soil types may also vary although all the grand crus are on the same chalky bedrock for which Champagne is rightly famous.

There are vineyards planted on the north side of this valley between Tours-sur-Marne at the eastern end and Epernay and on both banks of the river to the west of Epernay all the way to Saacy-sur-Marne some 20km beyond Château Thierry. The majority of plantings are Pinot Meunier (61%), which because of its late bud-break and early ripening is less vulnerable in this frost-prone valley. Meunier has a reputation as being Champagne’s workhorse grape, less refined than Pinot Noir and Chardonnay, but is widely used by the major houses because its fruitiness and early development help soften their non-vintage blends making them more approachable when young. Meunier is also the mainstay of blends made by many fine smaller producers located in this region. 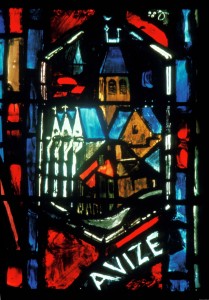 The name of this district, which runs at right angles to the Vallée de la Marne due south from Epernay, comes from the fact that is almost exclusively devoted to the cultivation of white grapes. The vineyards are mostly on the purest form of chalky Belimnite sub-soil, rich in minerals and trace elements, and largely face to the east. More than 95% are planted with Chardonnay and grapes from the four grand cru villages clustered in the centre of the Côte – Cramant, Avize, Oger and Le Mesnil-sur-Oger – are the most sought after in the appellation and command the highest price per kilo. Not only do they help lift any blend they are added to, pure Côte des Blancs Chardonnay from any of these villages may produce wines of great intensity, minerality and longevity which tend to be somewhat austere in their youth.

This district of 2,432 hectares is in effect a continuation of the Côte des Blancs, separated only by the marshes of Saint Gond. The sub-soil here is mostly clay and clayey silt with some pockets of chalk and the vines are oriented towards the southeast. Like the Côte des Blancs it’s mainly planted with Chardonnay (64%) but around a fifth is given over to Pinot Meunier. Thanks partly to the favourable south-easterly aspect the wines tend to get riper and be more forward and fruitier than those in the Côte des Blancs, some say slightly more rustic and less fine. The area is rated 87% for white grapes and 85% for black grapes on the Échelle des crus.

This area in the Aube department may not be well known but it contains nearly a quarter (8,001 hectares) of the total vineyard area in Champagne and the vast majority of it — some 83 per cent — is planted with Pinot Noir. Because there isn’t much Pinot Noir available in the Montagne de Reims, and the frost prone Vallée de la Marne has a higher percentage of the hardier Pinot Meunier cultivated, the major negociants come here to source full flavoured, ripe Pinot Noir to blend in their non-vintage wines. Almost exactly half the appellation’s Pinot Noir is planted in the Côte des Bar.

This area also has some of the prettiest countryside and villages in the whole of Champagne and in the three communes that make up Les Riceys — Ricey-Haut, Ricey-Haut-Rive and Ricey-Bas — it has something unique among French vineyards. This is the only place in France where wine may be produced under three different appellations, one fizzy (Champagne) and two still, the red wines Rosé des Riceys and Coteaux Champenois.