This page covers the champagnes I’ve been trying both at trade tastings and events, in restaurants and bars, plus what we’ve been opening at home. We’ll look at launches, new vintage releases and dig into the cellar for a few special treats and to see how some of our favorite champagnes are developing with time in the bottle.

The currently available release of Leclerc Briant Brut Réserve, which is actually 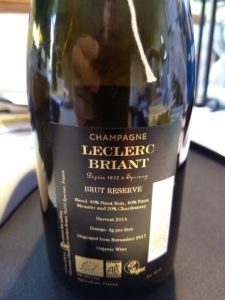 ‘Extra Brut’ in style as it only has 4gm/l dosage added at disgorgement, is based on the 2014 harvest. It’s an organically certified blend of 40% Pinot Noir, 40% Pinot Meunier and 20% Chardonnay, the half bottle I tasted being disgorged in November 2017, so benefitting from nearly 10 months post-disgorgement ageing on the cork. A light golden colour with a pronounced savoury nose, there’s a tangy saline note and attractive mid-palate richness. It’s an enjoyably moreish, uplifting fizz.
Borough Wines, £43 a bottle, £26 a half bottle (37.5cl) https://boroughwines.co.uk/champagne-sparkling/champagne/, 020 8988 3157. 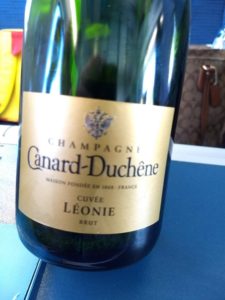 Created for the restaurant market and independent merchants, Cuvée Léonie Brut — named after Canard-Duchêne’s joint founder Léonie Duchêne — gets some extra bottle age which give it more depth and richness. I’ve always liked this blend of mainly black fruit (50% Pinot Noir/30% Meunier) livened with a splash of well-sourced Chardonnay, but it has been transformed over time by Laurent Fédou — winemaker since Alain Thienot bought the house from Veuve Clicquot 15 years ago — into something really quite impressive; a serious, grown up wine.

Served in magnum at Canard’s recent 150th anniversary celebrations in Ludes, it’s deliciously fresh (the magnum format well may accentuate this) and with an increased reserve wine element, which Fedou reveals has grown in this blend based on the 2014 harvest to around 40%, has some attractive mid-palate richness and texture. This may be partly explained by the judicious use of oak aged juice – just 3 or 4% of the blend is aged, but not fermented in Argonne oak from the Champagne region (locally produced oak from these forests located to the east of Reims was once widely used for making barrels in Champagne). The long elegant finish sets it apart from many mainstream brut styles made by large producers.
Richard Granger Wines, £27.42 a bottle, £17.04 a half bottle (37.5cl), http://www.richardgrangerwines.co.uk 0191 2815000. 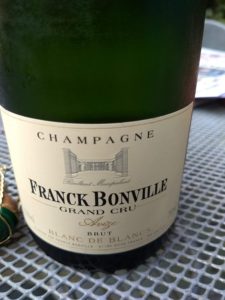 I’ve been to see Olivier Bonville, the winemaker at Franck Bonville in Avize several times over the course of many years. While I’ve always liked his wines, I hadn’t come across them recently. But a good friend produced a bottle of Avize Grand Cru Blancs de Blancs as a delightful prelude to Sunday lunch, the other day. I was so impressed I bought a case the following week.

After a few fizz free days on holiday in southern Spain, it seemed like just the wine to brighten our first weekend back at home. Sadly, the first bottle opened was badly corked. Happily, this has become more of a rarity recently, although it is more likely to occur with older bottles, and annoyingly it does have an unhappy knack of happening when you’re away, without an alternative easily to hand. But quickly chilled, bottle number two was soon open and ready to sip.

Lifted, with an exhilarating citrus-tinged initial freshness, like the wine revisited in April, what impresses about this champagne is the mid-palate intensity and chewy richness. The latest NV release, a blend of Avize and Oger Chardonnay, is based on the 2015 harvest (75%) with a good slug (25%) of reserve wine from the previous year. It was bottled in March 2016 and the initial batch was disgorged in January 2018 with 9.17g/l dosage.

But I’m tempted to think this sample, which has developed a creamy generosity, has had longer on the cork and is from an older harvest base. The shape of the withdrawn corks (both bottles opened) bears this out. It’s a top-class example of Côte des Blancs Chardonnay.

The Bonville estate comprises 77 parcels making up 15 hectares of grand cru vineyards in three Côte des Blancs villages: Avize where the house is located, Oger and le Mesnil-sur-Oger. In my book on Champagne first published in 2011, in which Franck Bonville is one of a small number of Côte des Blancs growers highlighted (I’d add some others now), I recorded some family vineyards located in Cramant also, but perhaps that was a misunderstanding, I’ll have to check that with Olivier. It’s great to see the quality of his wine continues to be at the highest level.
Cadman Fine Wines, £31.50 a bottle https://www.cadmanfinewines.co.uk 01604 696242.