Too few restaurants offer a decent selection of half bottles on their wine lists, though the trend towards listing a number of wines served in 25 and 50cl carafes, now seen in many more casual dining establishments, is to be applauded. Half bottles of champagne are particularly handy, especially if there’s two of you and you plan to have some wine too. Just a glass of good fizz is rarely enough. 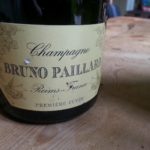 While quite a few champagne houses now seem reluctant to produce half bottles, citing quality issues and the fact that they mature more quickly, I see that (speed of development) as an advantage in certain instances. A half bottle of Krug is a welcome treat, especially if it’s been cellared for a while, as you can now check via the Krug ID code on every bottle. Celebrating a milestone with friends last month we kicked off, before they arrived, with a half bottle of Bruno 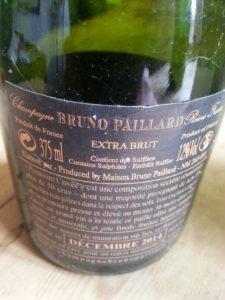 Paillard’s Première Cuvée Extra Brut, that helpfully also had a disgorgement date on the back label – December 2014 (see picture). A little more age and the format, helped soften this lovely champagne which in larger formats, certainly magnums, might seem quite austere without quite a bit of extra cellaring.

When I received some samples of Lidl’s champagne in half bottles to taste a couple of weeks ago, I was therefore quite hopeful. One of the MWs who tastes and gives marks to all their wines, had suggested the rosé was definitely worth trying. A cherry fruited fizz that pleasingly drinkable he was right about the Henri Delattre pink and at just £7.99 a half bottle (from 30 March), I wouldn’t expect it to hang around on the shelves. The Comte de 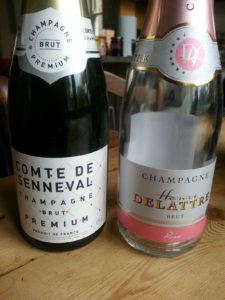 Senneval Premium Brut half bottle, a different style from the regularly stocked Comte de Senneval that sells for £9.99, is even better than the pink. It may be only 50p cheaper than the 75cl bottle, but it’s in a different class, with a very attractive maturity and rich mid-palate, an affordable treat.

Curiously enough its supplied by BCC (as is the regular Comte line) which is the group that Paillard in chairman of, outside his own maison (the BCC group also includes Lanson, and smaller artisan producers like Philipponnat, Boizel and De Venoge). Maison Burtin, the remodelled Marne & Champagne part of the group is the specific supplier and often a source of very interesting ‘own and exclusive label’ champagnes like the Waitrose Blanc de Blancs.

One of my favourite pink champagnes, Philipponnat Réserve Rosée Brut, strangely seems to be more widely available in halves that in bottles. It comes up priced at £28.95 at the Whisky Exchange, though on closer investigation this turns out to be Bollinger Rosé, they only have it currently in bottles (at £42.65), but Harvey Nichols have the halves (£27.50). The Whisky Exchange site does however prove to be worth finding, with delights like Charles Heidsieck Brut Réserve, Billecart-Salmon Brut and Rosé, Veuve Fourny’s classy Blanc de Blancs, Louis Roederer’s Vintage 2011 Rosé and Krug Grande Cuvée, all in half bottle formats.