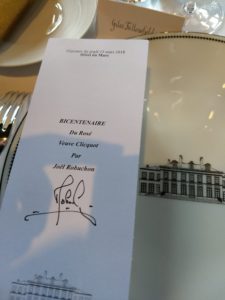 Very sad to hear the news (yesterday) that celebrated chef and restaurateur Joël Robuchon has died after a long battle with cancer. He’s the man whose restaurants have been awarded more Michelin stars than anyone else – they hold 23 round the world currently. I have been lucky enough to meet him, and eat his sublime food, twice in the past five END_OF_DOCUMENT_TOKEN_TO_BE_REPLACED

My guess we would be looking at matching Robuchon’s food with something from Veuve Clicquot’s Cave Privée range like the 1989 Rosé wasn’t far off the mark. In fact when I spoke to the celebrated chef later on in the afternoon he mentioned how well that lovely mature, Burgundian-like rosé went with pigeon. At this extraordinary lunch we actually had its white partner the 1990 vintage partnered with quail, caramelised foie gras and Robuchon’s famed pomme purée truffée (see the full menu below).

For me the day started with an interview with Clicquot’s relatively new (one year in the job) President and CEO Jean Marc Lacave (Veuve Clicquot CEO Interview Harpers 3 May 2013) before joining the small group of international journalists over a glass of La Grande Dame 2004. Lacave explained that under the new tie up, Yellow Label and Rosé in magnum will be the House pour at all Joël Robuchon’s restaurants round the world with Vintage 2004, Vintage Rosé 2004, La Grande Dame 2004 – white and rosé — all listed.

Lacave is keen to bring attention back on Clicquot’s flagship Yellow Label Brut, a wine that has also been a focus for chef de cave Dominique Demarville, pointing out it had rarely been served to guests of the house at Hotel du Marc over recent years.

As if to underline the point the first two lunch dishes were paired with Yellow Label and non-vintage rosé both served in magnum, Demarville setting us the not too onerous task of deciding the style that matched the caviar best and which we preferred with the langoustine. Contrary to expectations, his and ours, it was pretty well unanimous to marry the rosé with the caviar, as the combination seemed to enhance both wine and food. While the Yellow Label, showing good freshness, depth and structure, helped by serving it in the big glasses (see picture) also favoured by Dom Pérignon winemaker Richard Geoffroy, rose to the challenge of the perfectly cylindrical turban of spaghetti, standing up well to the rich langoustine sauce (see photograph).

The Clicquot 2004 was in 75cl bottles not magnums, Demarville quick to point out that the magnums of this wine are still too fresh for the dish. Already showing developed secondary aromas on first release last year this wine has opened up even more and is a lovely example of this fine vintage, a big, powerful, full flavoured wine, quite a contrast to the La Grande Dame 2004 that preceded it, a theme I shall return to. The strong trufflely flavours and textural creaminess of the Zephyr au Fromage needed such a rich, aromatic, Pinot Noir dominant fizz.

The climax of the meal, vinous and gastronomic, was the quail and the 1990 Cave Privée with the wine close to its peak of complexity and the chef matching its many nuances of flavour and texture on the plate. The 1990 was also at least a good match with the cheese –Comté and mature vintage champagne is a brilliant combination – as the charming classical Château Lynch Bages 1988. But as Demarville explained the red was there “to have a change before we go to the sugar”.

Two puddings was really a step too far, but given I knew Robuchon himself was in the kitchen, an experience not likely to be repeated, like everyone else round the table I ate both. To accompany them we moved to a demi-sec with a 45g/l dosage which Demarville gently pours into a baccarat decanter before serving. “Why? For three reasons,” he explains, “firstly, because it looks beautiful. Secondly because with the demi-sec it will actually make the flavour of the wine even more intense, showing pineapple, mango and exotic fruit flavours and the bubbles will be gentler as a result. The third reason is  historical, before Madame Clicquot invented riddling in 1816 the wine was shipped with the sediment still in the bottle and it had to be decanted when served.”

If you wanted any current Michelin-starred French chef to cook lunch for you In London, Paris or further afield, one name is more likely to come up than any other — Joël Robuchon. He currently holds 26 Michelin stars in his various restaurants around the world. And if you were looking for a vinous style of vintage champagne, Veuve Clicquot’s, particularly something from the Cave Privée range like the 1989 rosé, would be a fine choice to match with his dishes. La Grande Dame, white or pink, might also make for some interesting food and wine combinations.

So tomorrow’s lunch at Clicquot’s recently refurbished Hotel du Marc in Reims, where Robuchon himself is at the stove trying out suitable combinations, is a mouth-watering prospect. Hope to tell you more about it after the event, a special lunch to celebrate a new link-up between the two celebrated brands.

Spicy food with Champagne, it’s not an obvious choice. I once persuaded a CIVC henchman I was lunching with to try Champagne and oysters spiced up with a dash of Tabasco sauce and he quite clearly thought I was mad. But finding suitable styles of Champagne and other sparklers to match spicy food was exactly the challenge given to a number of on trade suppliers. It wasn’t just any old spicy food either, but a menu with a real kick put together by Vivek Singh at the Cinnamon Club.

To help us decide what might work first of all we tasted all the wines that had been entered for the challenge, looking at the different styles and levels of sweetness, ranging in the case of the Champagnes from a bone dry Extra Brut (just 3gms sugar per litre compared to the Brut norm of around 11 or 12gms) to a Pol Roger Rich (a demi sec), which someone had thoughtfully put in. It appeared that those who merely entered the standard NV Brut style of the house they represented hadn’t fully thought things through, or perhaps they didn’t understand that we really did mean full on spicy.

But while it would have been better to have had some more obvious food friendly styles whether vintages, sec and demi-secs or perhaps cuvées that had seen some oak, among the two-dozen of so samples on the table, we certainly had enough options to get an idea of what did or didn’t work. We kicked off with three fishy appetisers, stir fried crab; garlic crusted king prawn and tandoori swordfish, matching them against several NV Brut styles initially as we kept back more concentrated, pink and sweeter options for some more challenging dishes later in the menu.

Each of these three dishes had accompanying sauces of varying density and strength, but the crab, which was spiced with garam seeds and the garlicky prawn dishes were easier to tame than the smoky tandoori swordfish.

Chef Singh said there were two ways of approaching the matching exercise: either putting together complementary flavours or else something that was a big enough contrast to cut through the spicy richness of the food. Of the non-vintage Champagne blends those with greatest intensity and the one all Chardonnay cuvée, fared best against the fish and seafood. The extra depth, maturity and a certain gingerbread-like spice of the Deutz Brut Classic and the lifted citrus notes of the Henriot Brut Souverain getting the best response from the panel of tasters while bright and fresh Piper Heidsieck, one of the best appetisers styles of Champagne on the market, was deemed an acceptable match.

For the next course of three different meat starters: tandoori chicken, char grilled partridge and spiced pigeon cake we tried a selection of the pink fizzes ranging from Lanson’s NV Noble Cuvée to sparklers from Tasmania, Argentina, Spain, Italy and the Loire; two Pinot Noir dominant blends of Champagne from small producers in the grand cru village of Bouzy in the Montagne de Reims and Pol Roger NV Rich for good measure.

Of the pink fizzes, the extra concentration of Lanson’s Noble Cuvée Rosé stood out as matching the intensity of spice in the first two dishes, although the lentils served with the chicken were hard for anything to cope with. Pinot Noir’s affinity with spice was also demonstrated by the 2000 vintage of Georges Vesselle’s Brut Zero while the other most successful match was Pol Roger Rich, which at least one panellist thought would have been the best option if you had drunk just one Champagne through the meal.

In the spiced pigeon cake the higher chilli quotient was just too much for the dry styles of fizz and even the Pol Roger was a fairly poor foil. As we went on to an even more intensely flavoured main course of smoked rack of lamb – marinated in mace, cardamom, cream cheese and yoghurt and served with two sauces: mint, cashew nut and chilli plus onion and saffron – nothing worked until we turned to the sparkling reds, where the lack of harsh tannin, sweet fruit, a minty element and the inherent spiciness of the Shiraz grape coped manfully. Both the longer aged style of the Black Queen Sparkling Shiraz 1999, and the spicy Majella Sparkling Shiraz 2004 (Coonawarra) worked well, the only issue was the high alcohol level at lunchtime.

With something lightly spicy and garlicky, especially if it involves fish or seafood, try an all Chardonnay style of fizz with a bit of zip.

More intense flavours need a wine with more depth and concentration like an aged vintage Champagne or a more oxidative style that is perhaps encouraged by oak fermentation, styles like Bollinger, Gosset and the Georges Vesselle vintage we tried spring to mind.

Off dry Champagnes, which may be classified as anything from ‘Extra Dry’ through ‘Sec’ to ‘Doux’, the sweetest, often work better with spicy food than they do with puddings.