Champagne producers agreed to set the maximum yield level for the 2019 harvest at 10,200kilos per hectare, 600kgs/ha down on the base level of 10,800kgs/ha originally* announced for the 2018 harvest. If this level of yield is achieved in 2019, it will produce around 300m bottles. The CIVC Comité that represents the two sides of the champagne business — the (grape) growers and the merchant houses (négociants) – see this as the appropriate level to provide a suitable supply of champagne to meet future predicted demand. Or as the Comité put it: “This volume ensures a supply consistent with the needs of operators and maintains a balanced stock level for the sector.”

When they make this decision on the yield level in late July, with the harvest start typically six to eight weeks away, as well as considering the approaching harvest’s potential in terms of quality, health and size, plus the level of stocks and reserves currently held by producers, they look at current and future worldwide demand for champagne. It’s this last element that’s the trickiest; predicting demand. With issues at home, French domestic sales still account for nearly half of all champagne consumed (48.7% or 147.1m bottles in 2018) and in the two major export markets, the UK which is the largest by volume and the USA, the most valuable, this decision was particularly difficult this time.

As the Comité commented in its 24 July statement: “In the first half of the year [2019], Champagne sales increased further thanks to exports. It [value] is close to 5 billion euros over 12 rolling months despite decreasing shipments pronounced on a French market affected, including the consequences of an increased legislative framework of promotions in supermarkets. The resumption of shipments to the UK is only related to the precautionary measures taken on the assumption of a hard Brexit. The dynamism of most third countries, subject to uncertainties on world trade, will probably not fully offset the decline in volumes on the French market.”

This statement needs some interpretation. Worldwide demand for champagne is currently flat with shipments down 1.5% to the end of May 2019, while the MAT year-end figure is predicted to be around the 300m bottle mark. In the French domestic market — where 48.7% of champagne was sold in 2018 by volume but only 41.7% by value – it appears that French legislation banning the sale of champagne at under cost is being more rigorously applied. This is accelerating the overall decline in sales in France.

Shipments to the UK, which went up in the first half year only did so because of producers and retailers stockpiling in advance of the previous Brexit deadline of 29 March. Something it was fairly easy and relatively risk-free to do as at that time, just after the important year-end sales peak, as warehouses were fairly empty. The Champenois don’t believe this is sign of the UK market recovering any time soon. The Comité statement doesn’t even mention anything about President Trump’s threat to impose increased import duties on French wine into the USA, which would also be likely to have a negative impact on sales there.

What the important last quarter of 2019 will bring in terms of sales – it’s in these three months a disproportionately large percentage of champagne is purchased — is therefore very hard to predict. If there is an unexpected surge in sales, there is plenty of supply, however. Stocks are relatively high and after the bumper and high quality 2018 harvest, the average reserve held across the appellation sits at 7,750 kg/ha, very close to the maximum level of 8,000kgs/ha, and equivalent to around 230m bottles.
*While the yield for the 2018 was originally set at 10,800kgs/ha, partly because of its high quality, the Institut National de l’Origine et de la Qualité (INAO) later agreed to allow producers to add 4,700 kg/ha to the reserve (providing their reserves did not exceed the maximum of 8,000 kgs/ha) so producers could harvest up to 15,500kgs/ha.

Champagne shipments has risen very slightly compared to the 306.096 bottles reached in 2016, rising by 0.52% or around 1.6m bottles to 307.7m bottles in 2017. At the end of November 2017 shipments were in line to rise to around 311m bottles and even the Union des Maisons de Champagne (UMC) was predicting 310m bottles. But sales in December, usually the busiest month in the year, fell back generally by around 10%, on the same month in 2016.

The news follows a difficult harvest in 2017, when the general quality, particularly of the END_OF_DOCUMENT_TOKEN_TO_BE_REPLACED

Champagne shipments to the UK in 2016 were down 8.68% in volume, falling from 34.2m to 31.2m bottles and 14.03% in value, dropping from €512.2m to €440.4m, the detailed figures just released by the Comité Champagne reveal. This was the largest percentage drop in value among all the top ten export markets, only five of which showed any volume growth in 2016, with shipments to the USA rising the most, up 6.33%, although the value of the 21.8m bottles shipped to the USA only rose by 4.9%.

The fairly dramatic fall in the value of UK shipments, END_OF_DOCUMENT_TOKEN_TO_BE_REPLACED

The yield for the 2016 harvest, currently expected to begin around mid-September, has been set at 9,700 kilos per hectare with a further 1,100kgs/ha to be taken from the reserve at the start of February next year. This level of yield will potentially produce around 283m bottles with a further 32m bottles coming from the reserve next February, if appropriate, making a total production of 315m bottles. This compares with worldwide champagne shipments of 312.5m in 2015 and the news that the MAT total for shipments in the 12 months to the end of June 2016 were up just over 2%.

However, after a very difficult growing season in Champagne so far this year with frosts, disease and uneven flowering all reducing the actual potential yield from the 2016 harvest, it seems likely END_OF_DOCUMENT_TOKEN_TO_BE_REPLACED

With the 2015 harvest in Champagne expected to start generally around 10 September, the CIVC (Comité interprofessionnel du vin de Champagne) set the maximum allowed yield at 10,500 kilos per hectare at its meeting in mid-July, with a further 500kgs/ha to be released from the ‘reserve’. This is the same level of yield as was set for the 2014 harvest and is in line with expectations that champagne shipments worldwide will be around 307m bottles in 2015, close to the level reached in 2014 when 307.12m bottles were shipped.

With the current level of vineyard in active production of just under 33,700 hectares a yield of 10,500kgs/ha would produce about 306.5m bottles and the additional 500kgs/ha could potentially add just under 15m further bottles.

Britain continues to lead the way in champagne consumption with imports rising by 6.1% to 32,675,232 bottles in 2014, that’s more the next two markets, the USA and Germany, can muster together. Value was up slightly more by 6.7% to just over 477m€ giving an average price per bottle of 14.6€. The British consume more than seven times the combined volume of champagne imported by the much vaunted BRIC countries with consumption flat in China and Russia, up 10.2% in Brazil and down 16.2% in India. Britain takes 22.4% of all champagne exports.

The basic yield in for the 2014 harvest was set at 10,500kilos per hectare by Champagne’s governing body the Comité interprofessionel du vin de Champagne (CIVC) which regulates champagne production at its meeting just before the August holiday break. This level of yield will to produce around 305.7m bottles of champagne. This is the volume of champagne the CIVC committee charged with analysing the market believes will be needed given the relatively high levels of stocks held by producers that amounts to nearly four years supply.

It is not a particularly optimistic assessment of the current situation which is partly based on the shipment figures for the first half of 2014 that show a very slight rise of 1.4% on the first half of 2013 to 110m bottles. But of course the majority of champagne sales are made in the second half of the year — particularly the last quarter — and predicting the level of demand in the run-up to the year end is always problematic. The MAT figure for the 12 months to the end of June 2014 helps a little, that is up 0.3% to 306.5m bottles on the same 12 months to the end of June 2013. But it is a still a difficult market to read.

The calculation about what a certain yield will produce is easy enough, you just need to know the current area of productive vineyard and that is 33,600 hectares. Because predicting consumption accurately is so difficult, the Champenois have devised a system by which they can make later adjustments to allow for fluctuations in demand by releasing more of the wine held in the Réserve to boost production.

This is quite a complicated system to explain. For 2014, in fact 400kgs/ha of the 10,500kgs/ha allowed will come out of the current reserves held and not the 2014 harvest. And if shipments look like rising above 307m bottles, the CIVC will raise this to 500kgs/ha. In addition vineyard owners can also put up to 3,100 kg/ha into their own reserve stocks, providing that reserve does not exceed the limit prescribed by regulations.

Outside Europe the market for champagne in Japan and Australia remains buoyant with shipments to the latter, the sixth most important export market now, up 11.4% following on from 11.2% growth in 2012 and a 31.9% spurt in 2011. The Japanese market also continued to grow with shipments up 6.75% to 9,674,446 bottles.

In terms of value because of the higher average bottle price — consumers there favour more expensive rosé champagne and prestige cuvées — Japan may well have overtaken Germany as the third most important export market in terms of value. Those detailed figures are not available yet but with average shipment prices at €19.19 in Japan versus Germany’s €14.83 in 2012, the gap in terms of Euros between the two was less than €14m though over 3.5m more bottles went to Germany. 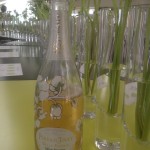 You can see why the Champenois like the Japanese market and 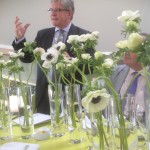 that’s the reason Perrier-Jouët has just chosen to launch its new 2007 Belle Époque Edition Première there (a wine I tasted with winemaker Hervé Deschamps last Thursday in London of which more soon) in time for the Spring blossom. A few years ago Veuve Clicquot launched its non-vintage rosé in the Japanese market before releasing it anywhere else and the PJ has hint of pink from macerated Pinot Noir.

The feeling that the biggest houses are concentrating their efforts on the emerging markets like the BRIC countries and that this is where the growth is all going to come from in the short term took a blow. Shipments to China were down 18.35%, exports to Russia only up 4%, Brazil fell 0.46% and while India was up 5.36% shipments there still only reached a paltry 367,020 bottles.

When I spoke to Moët’s CEO Stéphane Baschiera on the telephone last month he mentioned that Mexico was a ‘priority market’ for the largest champagne brand. Perhaps therefore unsurprisingly the highest percentage growth achieved by any top 30 countries came in Mexico where shipments rose 31.18% to 1,137,845 bottles. That’s more than India and Brazil put together, though sitting together in 15th and 16th position in the top 30, China and Russia are still slightly larger at 1.63m and 1.54m bottles respectively. Shipments to the UK are however still more than five times larger than all five of these markets put together.