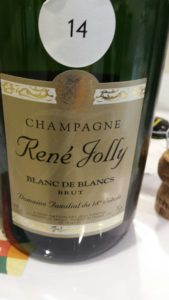 Waitrose has by some way the widest selection of sparkling wines and champagnes among the main UK grocers and has introduced some further exciting lines recently, mostly only available through its on-line Waitrose Cellar operation which runs to 63 different champagnes. While the current 25% off promotion is running — until next Tuesday 8 November — this is a great opportunity to try some of these at a bargain price. In addition, there are some attractive deals on some prestigious names, rarely discounted to this extent.

However, when I checked on the Waitrose Cellar website yesterday afternoon quite a few I’d put in the latter category were coming up ‘out of stock’ including Pol Roger Brut Réserve and Louis Roederer Brut Premier in magnum, each listed at £79.99 so available for £60. (Of these two I have a preference for the extra depth and complexity of the Roederer, but either would make a great Christmas Day morning statement.)

This was, Waitrose press office tells me, down to huge demand on Wednesday and Thursday, but more stock has arrived today and currently as I write (Friday 4 November) only one item, out of 61 lines, the very decent Nicolas Feuillatte 2006 Blanc de Blancs, is unavailable. In fact Taittinger’s Comte de Champagne, down in price from an already very reasonable £100 to just £75 under the deal, has been taken off the list. Presumably they couldn’t get more stock of that to sell at such a price. 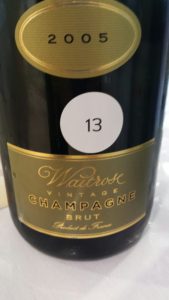 Based on a mixture of previous experience and trying some of the new champagnes at the grocers’ winter tasting last month, these are the champagnes I’d seek out. The two stand out wines for me were the new Waitrose Brut Special Réserve Vintage 2005 made by the CRVC co-operative in Reims and Le Mesnil Grand Crus Blanc de Blancs 2007 Vintage, another co-operative wine. Co-operative is not a dirty word in Champagne and often such wines offer much better value for money than the well-known houses, especially with top of the range cuvées.

These two are a complete contrast, the ‘05 a 50/50 blend of Chardonnay and black fruit (Pinot Noir and Meunier) is a sumptuously rich, creamy textured, seductive wine. Normally priced at £25.99 it drops to £19.49 until Tuesday, but if you miss out (it’s only just going into stores) it will be on a barely less attractive deal for most of December (£20.99).

Le Mesnil 2007 is a serious, more linear wine, of superb origin –the best Grand Cru Chardonnay vineyards – and this is a wine that will develop for years to come but is showing biscuity intensity and great length (normally £33.99 but down to £25.49) and a Blanc de Blancs style that will stand comparison with some of the top names like Comte, more than twice the price.

The other wines I’d pick out are from two small scale producers who are both based in the Côte des Bar region, Champagne’s most southerly vineyard not that far from Chablis. René Jolly and Fleury are both organic farmers, and the Fleury estate in Couteron has been run on biodynamic principles for many years. Fleury’s Blanc de Noirs (100% Pinot Noir) is a rich, characterful mouthful and a wine that really impressed everyone, in a line up I used for some Icelandic hedge fund managers last month at Home House. It’s priced at £30.99, so down to £23.24 until Tuesday, terrific value. The René Jolly Blanc de Blancs (100% Chardonnay) is the same price. Rich, toasty and savoury, it is more wine than champagne, with some oak fermentation adding complexity.

If you bought a case of six, one each of the Réne Jolly and Fleury to try and two each of the Le Mesnil and Waitrose Special Réserve vintage as bankers, you’ll have some great drinking to look forward to.