Taittinger at the World Cup, Lanson at Wimbledon, the link between champagne and a 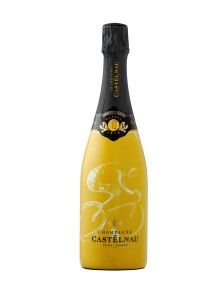 glorious summer of sport continues later this week with Grand Départ for the 1001st Tour de France in Leeds on Saturday. And if you are quick there still a chance until midday today to win VIP tickets to the stage 3 #London finish of Tour on Monday afternoon (7 July) care of De Castelnau Champagne and Spirited Wines http://bit.ly/TDFcomp  .

You have rather longer to enjoy the limited edition bottle of its excellent, richly flavoured Brut Réserve which De Castelnau has produced especially to celebrate its three year association with the Tour. It’s available at Spirited Wines priced £29.99.

At the recent London Wine Fair one of the highlights for me was the chance to taste De Castelnau 1990 vintage in jeroboam. Still fresh, but gloriously developed and complex vintage champagne like this is a joy to drink. You can get an idea of the vinous pleasure it gave by trying the current De Castelnau Brut 2000 vintage style — another ripe vintage for Champagne — that Spirited Wines sells at £38.68.

Augustin oversaw a complete restoration of Ayala’s fortunes and image moving over from managing Bollinger after the family bought the ailing house in January 2005. The CRVC MD Pascal Prudhomme says Augustin will help them achieve their objective of « reaching sales of 500,000 bottles for the De Castelnau barand by 2016, its 100th anniversary, with 50% sold outside France”. Aged 62, Augustin’s career in Champagne, which spans 37 years, began at Laurent-Perrier working with his uncle Bernard de Nonancourt.

The appointment of Leroux on the Charles Heidsieck brand shows EPI’s determination to build a talented management team capable of restoring this famous marque’s image, positioning it in the same territory as brands like Roederer and Bollinger.