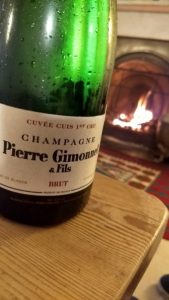 Next week I’m doing another Champagne tasting at the London HQ of the Wine & Spirt Education Trust (WSET). This time, with purchases for Christmas and the New Year partly in mind, I’m concentrating on pointing people in the direction of some great champagnes from slightly less known producers, which match or better some of the wines made by the big names. And partly as a result of being less well known, your money goes a lot further in terms of getting more exciting wine.

There are eight different producers involved, four growers and four co-operatives. We start with a fine pair of contrasting growers’ champagnes. Laherte Frères, who are located in the Premier Cru village of Chavot, make some lovely wines, many based on Pinot Meunier as Brut Ultradition, our first wine in the line-up is. Stylistically there’s quite a contrast with the Pierre Gimonnet Blanc de Blancs Premier Cru. Gimonnet, one of the first growers I ever met in Champagne over two decades ago, has a fantastic holding of top Côte des Blancs vineyards including Cuis, known for its steely longevity, where this family operation is based.

For the second pair we move more into Pinot Noir territory and these are sourced from two adjacent, Montagne de Reims grand cru villages, Bouzy and Ambonnay. Pierre Paillard only has vineyards in Bouzy, but as with most small producers, these are broken up into lots of tiny parcels spread all over the whole Bouzy cru which is roughly 365 hectares in size. This particular wine is a 60/40 Pinot/Chardonnay blend from 22 such plots Paillard owns.

Then we move to the Grand Cru of Ambonnay where Benoît Marguet is based – he’s just next door to Krug, who he sell grapes to incidentally

— for the super rosé he makes for Berry’s which is sold under their award-winning Berry’s Own Label range. It’s made from a blend of Chardonnay and Pinot Noir, using the saignée method where colour is literally bled off the skins of the black Pinot grapes.

In Champagne, as in other parts of France say like Chablis, the co-operatives make some of the best wines in the region. While some are sold under their own brands, as three of the wines in my tasting are, they are also the most important suppliers of Own Label champagne to the UK’s major supermarkets and occasionally gems crop up, particularly among the vintage wines.

In this tasting we are including four vintage champagnes, from a quartet of Champagne’s top co-ops, two from the fine 2008 harvest which even nearly a decade on, still shows a trademark vibrant acidity. One a Chardonnay/Pinot Noir blend, the other pure Chardonnay. Then we pair the top quality 2012 vintage (Grand Cru Blanc de Blancs), which may in time be judged as at least the equal of 2002, with a lovely mature 2005 which is at its peak. Hopefully a great note to finish on.

There are still some places left and the cost is just £45 a ticket/person. The tasting is on Tuesday 5 December and starts at 6:30pm, finishing between 8 and 8.30pm. Here’s a link to the WSET website you can use to sign up: http://bit.ly/2m1Q9hi