The Wine Society has some great offers on champagne running until the year end. And they have put together a mouth-watering six bottle case you can order up until 27 December for delivery by New Year’s Eve. And they’ve extended the deadline for pre-Christmas delivery to midnight on Sunday (20 December). 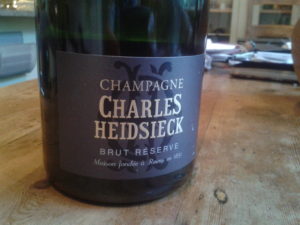 The case includes one bottle each of Charles Heidsieck Brut Réserve, consistently one of the best and most complex NV champagnes on the market over the past decade; the Society’s superb barrel fermented Alfred Gratien; Boizel’s Brut Réserve — excellent fizz from an under-rated producer I visited earlier this month and great value; plus a bottle each of Louis Roederer Brut Premier, Bollinger Special Cuvée and Pol Roger Brut Réserve, three brands that deservedly have the highest of reputations. All this for £149 (that’s less than £25 a bottle), only snag is you have to be a Wine Society member, but that doesn’t break the bank and gives you access to a whole load of other vinous goodies.  www.thewinesociety.com