Just over a th 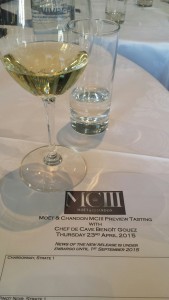 ird of the blend (37.5%, half Chardonnay and half Pinot Noir) is based on the 2003 harvest and has been kept in stainless steel. The next component is a similar amount of reserve wine from the 2002, 2000 and 1998 harvests which have been aged for a few months in large 50Hl oak casks. The final part, around a quarter, is a sub-blend of three fine previous Moët vintage releases – 1999, 1998 and 1993 – aged on their lees in bottle and then disgorged in early 2004 when the whole MC111 blend was assembled.

Talking about the whole concept at a pre-release tasting back in April (this story was ‘strictly’ embargoed until 1st September), chef de cave Benoît Gouez said it had long been an ambition for Moët to have its own prestige line, “since Dom Pérignon separated from Moët a good 20 years ago” and we have been thinking about what we could create since L’Esprit du Siècle was launched. That wine, based on the ‘95 harvest with components from each previous decade of the century was impossible to re-create commercially, there were only 300 magnums made.

According to the French newspaper Le Figaro which broke the story on 25 June, despite the September embargo, 15,000 bottles were produced and there are 200,000 of the next three MC111 cuvées ageing in Moët Epernay cellars. The most recent we know is based on 2013, the two before are likely to be 2009 and 2006 based. 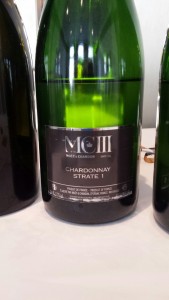 The idea for MC111 is to blend vintage wines aged in different environments — in bottles on their lees, stainless steel vats and oak foudres. “We are looking for fruitiness, richness and structure. Understanding we’re going to have some powerful elements we had to start with a base year that is itself quite powerful and strong. This [the first release] is based on 2003. The 2004 vintage that followed was too light to be the start point for such a blend. We have made three further MC111 blends, the most recent based on the 2013 harvest. It is believed the next two releases will be based on 2006 (already released by Moët as a vintage wine) and 2009, the latter year Gouez is known to favour over 2008 and that will be the Grand Vintage release Moët makes after the ’06.

To help our understanding of the new cuvée chef de cave Benoît Gouez set up a tasting of the three different component parts or ‘strate’ of the blend, as he calls them. We tried the two vintages used in the first MC111 expression – 1999 (disgorged in 2008) and 1993 Grand Vintage Collection – plus Chardonnay and Pinot Noirs components (there is no Meunier used in this wine) actually used in the most recent MC111 bottling made in January 2014 based on the 2013 harvest, in addition to 2006 and 2012 wood aged reserve wine components also used for the most recent blend. 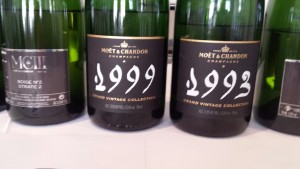 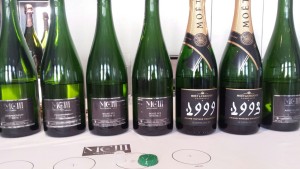 The Chardonnay 2013 pre blend component is fresh with bright citrusy notes. Gouez says the Chardonnay needed has a certain Burgundy style he characterises as “preserved lemon citrus. You need the tangy intensity for it to survive in the finished wine.” The Pinot Noir comes from the southern Montagne de Reims slopes: Bouzy and Aÿ bringing structural and spicy elements. The reserve wines of 2002, ’99 and 98 add “richness, freshness and vitality to the blend”, he says.

For the oak aged wines they use “50Hl casks not barrels. The base wines are aged in them between four and eight months,” says Gouez, “depending on how they quickly they evolve and get the character we are after. The wine is then moved to stainless steel tanks. We are looking for a ‘patina’ of softness and roundness; a textural element, not Californian Chardonnay. And we don’t want any oxidation.”

Strata three – the older vintages used – are about the darker, toasty, coffee and mocha elements. They also help re-inforce the reductive character of the blend. Gouez also notes that once the final assemblage is complete and bottled, going through what is effectively a third fermentation for this element of the cuvée, rejuvenates it, giving lightness and freshness to the whole thing.”

Gouez says they started working on this new project in 2000 immediately after the launch of L’Esprit du Siècle but the blends based on the ’98 and 2000 harvest won’t be released. “Although they are nice and elegant they are a bit too tight for this project.” But after 10 to 15 years of experimentation he feels they have now got the formula about right.

The just released MC111 (based on 2003) is richly aromatic. Fresh and bright initially, it opens up in the glass with a note of spiciness developing. There’s a lightness and vivacity underpinned by impressive concentration, with a chewy substance to the mid-palate plus a savoury persistent finish. At release it is arguably a lot more complex than Dom Pérignon, thanks partly to its many component parts. Initially it is available from Moet.com at £330.