While the Waitrose Blanc de Noirs, currently our ‘wine of the week’, is no longer on offer, with Father’s Day fast approaching there are still a couple of other champagnes on a deal that are drinking really well and represent great value. 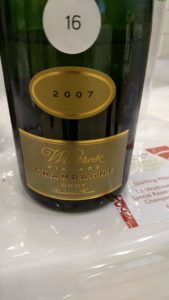 The Waitrose Brut Vintage 2007 (the ‘05 preceded it), which has been the grocer’s vintage champagne offering for well over a year now, is at or near its apogee. It’s a rich, generous style with a majority of Chardonnay in the blend (52%) plus Pinot Noir (42%) and a smidgeon of Meunier (6%) that’s made for Waitrose by the CRVC co-op in Reims where the excellent Castelnau wines are produced.

The winemaker there is the very experienced Elizabeth Sarcelet, who has worked in the winemaking team she now heads since 1985. Previously tasted in October 2018 when it was already showing ripe peachy fruit plus a quite luscious, fleshy mid-palate, it’s a very decent example of seductively mature vintage champagne that’s now showing a distinctive toasty note on the finish. Down £4 from £25.99 to £21.99 until next Tuesday, 18 June.

The style of the Duval-Leroy Grand Cru Blanc de Blancs is quite a contrast, although partial oak ageing for nine months rounds out some of the fresh acidity you’d expect from an all Chardonnay fizz entirely sourced from six Côte des Blancs Grand Crus: Le Mesnil-sur-Oger, Oger, Avize, Cramant, Chouilly and Oiry, this is still a wine that could happily be cellared further. The oak also adds a spicy element and more texture to the mid-palate. An all grand-cru Chardonnay from a bigger name would set you back considerably more than the usual price tag of £39.99 and until 18 June its £10 off at just £29.99.

However, if I was out to really impress a wine loving father with a top-quality champagne retailing for under £40, on the extensive Waitrose fizz list, for me it would have be Le Mesnil Blanc de Blancs 2012. Made by the modest but talented winemaker Gilles Marguet, at the small co-op located in the centre of this celebrated village, this is a wine you could put away in a good cellar for a decade easily. I have a magnum of the 1988 vintage in my own cellar and I’m not at all worried it’s already had over three decades ageing on the cork. I regularly buy its NV brother – Berry Bros & Rudd Blanc de Blancs by Le Mesnil priced at £33 – and for just £2 more at Waitrose you are getting a noticeable step up in concentration and richness, from what’s likely to be seen as one of the best two vintages of the current decade (it may be challenged by 2018 some suggest).