It’s very hard for a champagne brand to get rid of a negative image. Years of ownership by the Rémy-Cointreau drinks group (they also used to have Krug in their grasp), which better understands the spirits market, did a good deal of harm to Piper-Heidsieck’s reputation, something which in Champagne essentially rests on the quality of your mainstream non-vintage cuvée, likely to account for more than 80% of your sales. 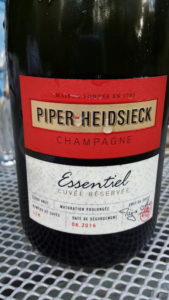 Purchased by the French luxury goods group Entreprise Patrimoniale d’Investissements (EPI) from Rémy-Cointreau in June 2011, along with sister brand Charles Heidsieck, fundamental changes were made to the way the business is run. Firstly, EPI owner Christopher Descours installed former boss of Veuve Clicquot Cécile Bonnefond – who knows a thing or two about promoting champagne’s image – as CEO, in line with its ambition to reposition both brands, setting up some new distribution chains with appropriate agents in the key markets it is targeting.

For Piper, this has involved trying to distant the brand, which has a very good track record on the competition circuit where its vintage cuvées have won many awards over the past decade or so, from the discounting off trade sector, particularly in the UK and French domestic market. In fact, the quality of Piper’s regular non-vintage brut has been very decent for over a decade, but during that period it has still often had to suffer the indignity of being heavily discounted in UK supermarkets. To pick one relatively recent instance at random I found recorded on this site, Sainsbury’s had it at £14.25 in late November 2015, in run-up to Christmas.

One further step forward in getting over the message about Piper’s quality credentials – not in doubt among a handful of journalists who have been applauding the wines for many years (I’d include myself and Michael Edwards among these) – has been to launch a ‘new’ version of the regular non-vintage with a lower dosage and longer ageing on its lees under the name Essentiel. I first tasted this wine with head winemaker Régis Camus on a visit to Piper in November 2015 and was immediately impressed. William Grant, which continues to distribute the brand in the UK market since EPI’s purchase, showed it again in November 2016 at the launch of Piper Rare Rosé 2007, but it still wasn’t for sale in the UK market.

However, it is finally available here from next month (September) and it takes a leaf out of Charles Heidsieck’s book in the labelling which reveals the date it was cellared – Mis en Cave 2012 – and thus the harvest base for the wine (2011). [On the back label is actually gives the 2011 base year and notes the 16% of reserve wine in the blend]. Plus the month and year of disgorgement, June 2016 in the case of the bottle I tried.

Showing the month of disgorgement goes a step further than Charles does currently as the Mis en Cave information sadly disappeared from this super wine a few years ago, and unhelpfully only the year of disgorgement is shown on the current release, something which is going to change, but hasn’t yet, winemaker Cyril Brun says.

Essentiel is an ‘Extra Brut’ style with a dosage of 5g/l (it has to be 6g/l or under to qualify as Extra Brut), compared with the regular Brut’s 9-10g/l and gets 12-18 months more bottle age. So the bottle I tried (pictured above) had about 42 months lees ageing and a further 12 months post disgorgement ageing on the cork before being opened.

This time on the cork is important and certainly helps develop the aromas of almond and ripe yellow fruit, while time also accentuates the silky mid-palate texture. This elegant wine will be sold in the on trade (restaurants, hotels and bars) and in high end merchants with an rrp of £37.99. EPI don’t want the grocers to get their hands on it. It represents another important step in rebuilding Piper’s image.