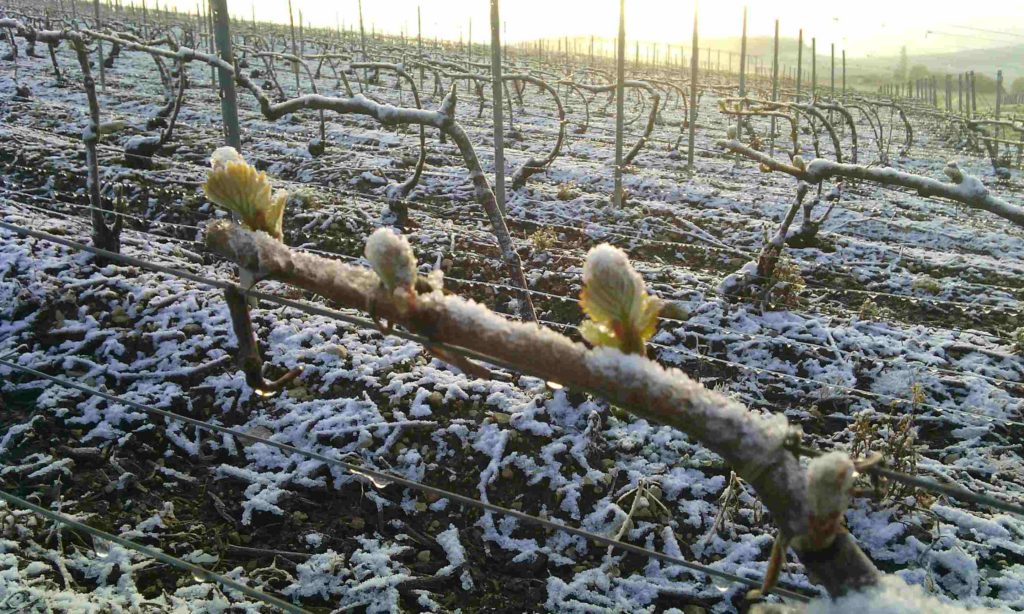 The frost that did major damage to vineyards across Burgundy at the end of April also had a major impact on Champagne’s most southerly vineyard area, the Côte des Bars, located to the south-east of Troyes. The temperatures didn’t drop that low, only 2 or 3 degrees of frost at most, but crucially they hit a saturated vineyard where there was even a light covering of snow (see photograph).

“The early morning temperature low of -2.5degC wouldn’t normally have much impact but the frost froze the water inside the embryonic buds,” says Michel Drappier of the eponymous house whose vineyards are based in Urville. Speaking at the London Wine Fair a few days ago, Drappier said: “We didn’t realise the extent of the damage until the next day and now the leaves have turned brown, like tobacco. There will be no Cuvée Quattuor” – Drappier’s rare four way blend of white grapes: Arbane, Petit Meslier, Blanc Vrai (Pinot Blanc) and Chardonnay – “all the Arbane has been destroyed.

“Chardonnay has been worst hit, because the plants were most advanced.” The Grande Sendrée vineyard next door from which the house’s white and pink prestige cuvée comes, has also been badly affected. “100% of the buds were frozen. Some may have green inside left perhaps, we may even get a second bud burst which could bring a much reduced later crop.”

Drappier says he hasn’t seen these conditions coincide before in over 50 years. “It was the combination of snow and sleet falling on already wet ground with a south-west wind, plus temperatures falling to -2.5degC in the early morning just before dawn. Normally it would have to be several degrees colder to destroy the buds,” said Drappier. The prospects for the 2016 crop are now bleak.

Drappier is no stranger to climatic disaster however. In June 2012 a localized hailstorm hit a swathe of Côte des Bar vineyards destroying the crop in over 100 of Urville’s 189 hectares and reducing his 2012 harvest to virtually zero. He was however able to make limited quantities of his main Carte d’Or Brut style thanks to wine held in reserve from previous harvests.